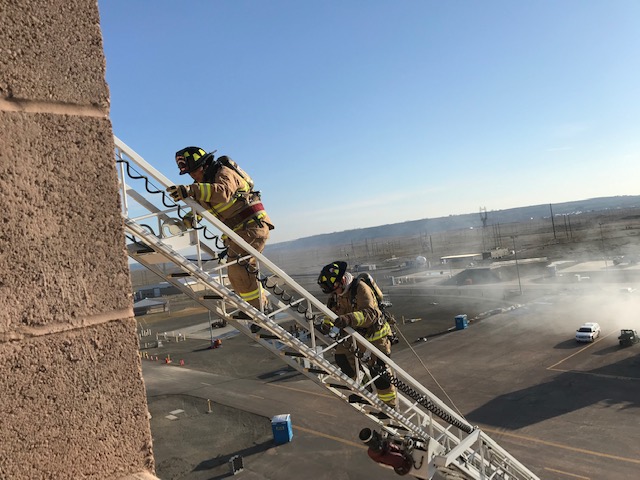 On March 15th, the IAFF 7th District conducted the fifteenth annual FIRE OPS 101 at the Hammer Training Facility in Richland, WA. Politicians, policy makers, journalists, and newly elected WSLC AFL-CIO Secretary Treasurer April Sims were among the participants. They donned full turnout gear, climbed a ladder up seven stories, ventilated a roof with a chainsaw, entered a smoke-filled house, put out several fires, learned extrication techniques, performed CPR, and transported a patient to an ambulance for a rocky ride around the course.

All these activities are designed to provide a hands-on experience of the time critical, highly technical, labor intensive nature of the job. WSCFF 2nd District Representative Jeff Wainwright says elected officials who have gone through FIRE OPS have a unique perspective when it comes time for votes on issues related to fire fighters and EMTs.

FIRE OPS 101 is facilitated by IAFF 7th District VP Ricky Walsh, with support from WSCFF District Representatives. Members from Kennewick, Walla Walla, Richland, Pasco, and Hanford work each station, and members from across the 7th District invite and instruct participants and shadow them throughout the day.

There are 42 spots available for participants, and all 7th District locals are encouraged to invite elected officials or members of the media to participate. The cost to the local is $350. The return on the investment is priceless.