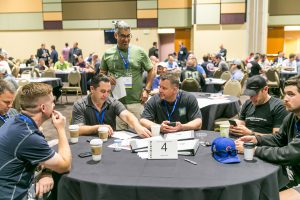 Three hundred and three delegates and alternates representing 8,567 union firefighters gathered in Kennewick in June at the 79th annual Convention of the Washington State Council of Fire Fighters (WSCFF). 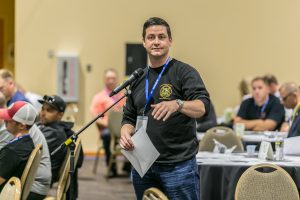 These union representatives, democratically selected by the members of their International Association of Fire Fighters (IAFF) affiliates, met to review the WSCFF’s finances, adopt a budget for 2019, set dues, elect officers, discuss legislation, endorse federal candidates, and address relevant occupational issues.  Among other things, they voted to provide financial support to the WSCFF Burn Foundation and the Firefighter Cancer Support Network, adopted policies related to wildland fires, developed educational programs, discussed diversity in the fire service, and identified areas of support for family members of fire fighters with PTSD.

“A gathering like this is an opportunity to really experience democracy in action”, says WSCFF President Dennis Lawson.  “Many different ideas and opinions come to the floor.  We debate, we argue and we don’t always agree.  But in the end, we commit to the positions taken by the whole body.

The WSCFF was founded on September 1, 1939 and represents 128 affiliated local fire fighter unions of the IAFF and more than 8,500 Washington union members, who are professional fire fighters, EMTs, and paramedics.