Commissioner of Public Lands Hilary Franz received the Jack Waller Honorary Fire Fighter Award from the Washington State Council of Fire Fighters at its 82nd Annual Convention in June. Franz has been a strong advocate for fire fighters in Washington. “In the wake of increased and record-breaking wildfires, she has worked tirelessly to provide additional funding for fire risk reduction and effective response strategies to the public lands of Washington,” said WSCFF 2nd District Representative and Wildland Fire and Mobilization Committee Chair Jeff Wainwright in presenting the award.

Franz, the daughter of a Portland, Oregon fire fighter, gave an impassioned speech about why, for her personally, the protection of fire fighters is so important. “It wasn’t until I was in this job that I truly understood the ultimate sense of sacrifice and selflessness our fire fighters bring to their work. They represent the very best of us. They see people not for their political party, not for their race, not for their economic status. They see people in need, and they run to help. No matter who it is that needs saving.” She added, “to count me as an Honorary Fire Fighter is one of the greatest compliments of my life.” 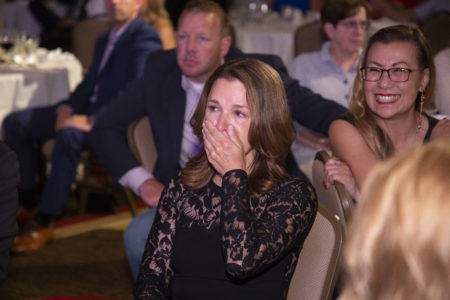 The Honorary Fire Fighter award, a memorial tribute to Brother Jack A. Waller, recognizes and honors individuals who have demonstrated their commitment, in word and deed, to promote the best interests of professional fire fighters in the state of Washington. From their generous and personal efforts, we have benefited. Commissioner Franz is a worthy recipient whose efforts benefit us all.