The Washington State Council of Fire Fighters held its 82nd Annual Convention, in person, at the DoubleTree Hotel in SeaTac, hosted by IAFF Local 1747 Kent. Two hundred and forty-three delegates and 37 alternates, representing nearly 8,500 WSCFF members, met to elect officers, discuss, debate, and vote on resolutions, and set the direction for 2022. 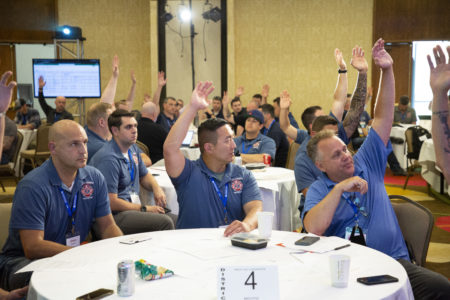 Fifteen resolutions were discussed in committees, 13 of which were brought to the floor and voted on. These included the operating budget for 2021-2022, the creation of a standing Diversity Committee, topics for the 2022 Educational Seminar, and the proposal to redistrict the WSCFF. 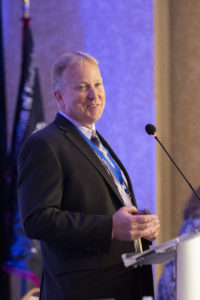 Kelly Savage, Outreach Director for the IAFF Center of Excellence, attended and presented delegates with important information on this program including:

The presentation of awards at the Wednesday night banquet was a highlight. Commissioner of Public Lands Hilary Franz received the Jack A. Waller Honorary Fire Fighter Award. It was “one of the greatest compliments of my life,” she said. Joe Kendo, Washington State Labor Council’s Government Affairs Director, was given the Walt Lambert Trade Union Leadership Award. “Thank you so much for the trust and recognition,” said Kendo. 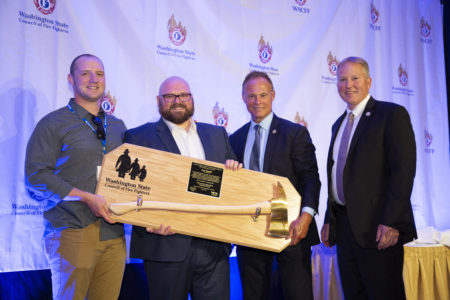 Ricky J. Walsh Fully Involved Awards were presented to Doug Baier, Local 437, retired; Craig Soucy, Local 864; Bill Mack, Local 1352; and Keven Rojecki, Local 1747. Baier was recognized for his long service to the WSCFF, his involvement in the production of the original Power Through Participation new member orientation program, and his many years chairing the Seminars and Education Committee at convention. Bill Mack didn’t seek re-election as 8th District Representative because he recently accepted a position as Deputy Chief with East Pierce Fire and Rescue, so this was his last WSCFF Convention. As Chair of the WSCFF Public Relations Committee, Mack played a major role in the revival of the organization’s PR efforts. He also co-chaired the Diversity Committee. Keven Rojecki and Craig Soucy were instrumental in developing the WSCFF’s response to the COVID-19 global pandemic. Their work was critical in protecting WSCFF members, our brothers and sisters in the IAFF 7th District, and first responders throughout the United States and Canada. President Lawson said, “they not only met the challenge. . . quite simply, they crushed it.”

New this year was the addition of peer-led daily support meetings for members coping with or in recovery from alcohol or substance abuse. Support meetings will be included in all future WSCFF events.

In addition to the business of the convention, members were updated on: the post-pandemic plans for the Fill the Boot Drive by MDA’s Jenny McGahan; Northwest Fire Velo’s Ride Across America – a fundraising, cross-country bike ride to commemorate the 20th anniversary of 911; DecisionPoint, a 457(b) provider specializing in financial planning for Washington Fire Fighters; Fire Fighters First Credit Union; and were invited to support the IAFF 7th District Benevolent Fund and the WSCFF Burn Foundation.

The 82nd Convention was remarkable just for occurring – it was the first in-person event the WSCFF has had since February 2020, and the first large event held at the SeaTac Doubletree since they shut down for 50 weeks starting in March 2020. Our members rose to the occasion and adopted some bold initiatives, including the creation of a WSCFF Standing Diversity Committee and the re-districting proposal presented at the 2021 Educational Seminar, which will restructure the WSCFF to more equally balance our districts. The WSCFF will proudly continue its mission to better the lives of all our members.

Copyright © 2021. All Rights Reserved.
Site crafted by The Rhizome Collaborative | Powered By UnionActive