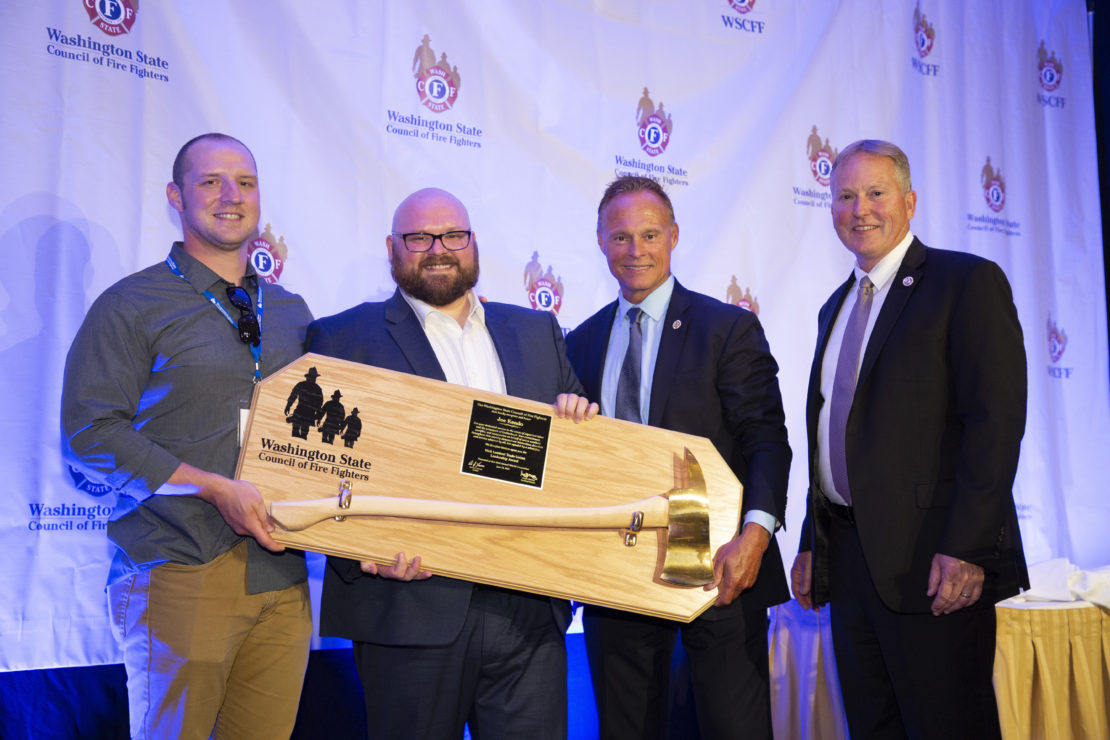 When the WSCFF Legislative Team asked Joe Kendo to speak at the 82nd Annual Convention, he had no idea that the real reason for the invitation was to recognize and honor him as the 2021 recipient of the Walt Lambert Trade Union Leadership Award. Kendo, Government Affairs Director for the Washington State Labor Council, AFL-CIO, in attendance with his brother, Local 2829 member Ben Kendo, was surprised, pleased, and “pretty giddy.” He was honored for his service to the cause of organized labor, and the principles of brotherhood.

In presenting the award, WSCFF President Dennis Lawson said, “His commitment, sacrifice, and compassion on behalf of union members throughout the country demonstrate tremendous devotion and service admired by all but equaled by a select few.” Kendo responded, “I just hope you know how meaningful it is for me to have my work recognized by you all in this way. I’ve always enjoyed working with your team, and super appreciate how the fire fighters show up in the spaces I work, and the leadership you exhibit for your members and for the rest of us in the movement.”

Joe Kendo and his brother Ben joined the legislative team for a photo opportunity with the plaque, complete with fire axe. It was a great night. But what about that speech? Here are some of the highlights:

As the AFL-CIO here in our home state, the Washington State Labor Council is made up of over 600 local unions representing half-a-million unionized workers in all of Washington’s communities. As a family of unions, our organization charges us to “combat the forces that would enslave the human soul. That’s a pretty heavy charge, but it’s clear as day how important that lofty responsibility is today.

Those forces, of course, are significant foes. Trillion-dollar companies whose reach extends into the halls of power and into the cache of personal data we generate with our electronic devices. Politicians who would rather spend their energies cutting taxes for the rich, and services for working families. Bosses who would squeeze the last ounce of blood and sweat from their workers to increase the value of their stock by a quarter of a percent or cut their budgets by a fifth.

And when they get their way, it’s on our backs, and on our children’s future, and at the expense of our siblings’ retirement security.

That’s why our work is so important. . .It’s because we are in these fights together. Because I know that when my labor family needs help, the fire fighters will be there. When nurses in our state were denied meal and rest breaks because their corporate hospital chains refused to adequately staff, the fire fighters stepped up and stood shoulder-to-shoulder with their sisters and brothers at SEIU, and the Washington State Nurses Association. And when you needed to expand workers’ compensation coverage for PTSD, and to ensure that fire investigators were protected as fire fighters, those same healthcare workers stood with you.

That’s how we do it in labor. And at the Labor Council it’s our job to pull the family together to strategize and build our campaigns for success. That’s because we will never have as much PAC money as corporate America to catch the attention of policy makers, nor will we have access to the personal data of millions of Americans to build AstroTurf campaigns meant to get people to vote against their best interests. But what we do have are people, and when our people see each other and act as one, we win.

There’s a reason we call each other by family-pronouns in our movement. Why you’re my siblings, and why some of our union elders are uncles and aunts, and even a grandpa here and there. It’s because that level of commitment to each other is what it has always taken to win for working families. Because disunity cracks the foundation of a people powered movement, and in large part that’s why the WSLC exists. We’re that kitchen table around which families gather to celebrate wins, to plan important events, and maybe most importantly to tackle tough or controversial issues.

It’s at these tables where we scope out the values that our members elevated through their local unions, where we learn from each other, find those areas of common alignment, and push forward as a family-movement.

Because when fire fighters won occupational disease presumptions in our workers’ compensation system, other workers took notice. A few years ago, workers at The Hanford Atomic Metal Trades Council saw what you won, learned from your experience, and locked down their own workers’ compensation presumption to ensure that their members had the care they needed. . . And last year, in the midst of the worst global pandemic in a century, nurses and hospital workers found strength in their victories and secured for themselves similar protections – building on the lessons learned by their brothers and sisters.

And it didn’t stop there, a litany of front-line workers secured the same kind of protections for this and future public health crises – and that’s a monumental win for all the grocery workers, and delivery drivers, and childcare workers, university employees, and municipal workers who weren’t able to work safely from home. You helped with that. Your experience leads to that.

And this is why we do that work together, why we support each other, and why we stay at the family’s kitchen table. It’s because this commitment to each other creates a virtuous cycle where one victory leads to another.

This is hard work, and it needs to get done. All of you in the fire service have done so much, but we need you to do more. We need more of you to run for office, or to become Republican or Democratic Precinct Committee Officers in local political party organizations. We need more labor-neighbor volunteers so that we can knock on more doors and make more phone calls to secure good legislators and members of Congress in the new maps that the redistricting commission is drawing as we speak. Union members trust other union members, and when they see you wearing out your shoe leather for your siblings running for office, they take notice.

And when you as fire fighters show up to Labor Council conventions, local party organization, and strike lines, you are also leading by extending your community service from the fire house to the union hall, to city hall, and ultimately to Congress and the White House. Your leadership is instrumental toward all our success. And I am proud to have you and all your local unions as a part of our union family at the labor council, and a part of the Kendo family specifically.