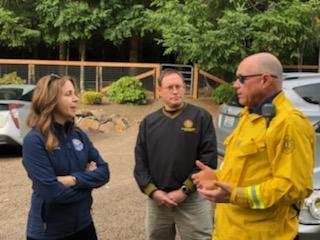 Expanded development encroaching on wilderness areas combined with the warming climate mean wildfires are occurring with greater frequency near and within urban settings.  This is known as Wildland Urban Interface WUI – not a place, but a set of conditions that can exist in nearly every community.  Conditions may include amount, type, and distribution of vegetation, flammability of structures, proximity to fire-prone vegetation, weather patterns and climate conditions. It can be in a suburb at the edge of a major city, or a handful of houses on an open range.

This evolving trend endangers more urban residents and threatens fire fighter safety.  In response, the International Association of Fire Fighters (IAFF) has developed a Wildland Interface Training Course that was offered this week, in partnership with Eastside Fire & Rescue and the South King Fire Training Consortium.  Elected officials – including Commissioner of Public Lands Hilary Franz, State Fire Marshall Chuck LeBlanc, and city of Issaquah Mayor Mary Lou Pauly – observed the training exercise with IAFF Director of Health & Safety Operational Services Director Rick Swan, WSCFF 2nd District Representative Jeff Wainwright, and Local 1747 Puget Sound member Brian Dodge serving as liaisons for the dignitaries. Training included both classroom and field work.  And because this is only the second time the IAFF has offered the course, it included “train-the-trainer” classes, so participants can take what they learned back to the fire fighters in their home communities.

Commissioner Franz has said, “Wildfire is not an eastside or westside problem.  It is not an urban or rural problem.  Wildfire is a problem for all of Washington.”

Wainwright, who chairs the WSCFF Wildland Fire and Mobilization Committee, says the course is designed to provide easily accessible training to as many fire fighters as possible. The goal is to provide the basic skills needed to operate safely in the WUI environment, defending homes and suppressing wildfires.