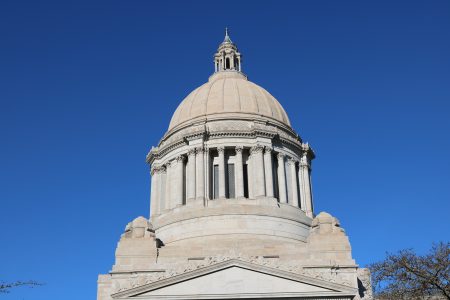 “Washington’s legislators just took its strongest stand yet on PFAS,” said Laurie Valeriano, Executive Director of Toxic-Free Future. “Our work to protect our water and improve working conditions for firefighters means we can now turn off the tap of those who contribute the most to this stream of toxic chemicals. The earlier bill in 2018 was a big step forward and now we’re finishing the job.”

“Phasing out this foam will protect the health of firefighters, who regularly use this foam to suppress fires, as well as the broader population exposed to buildup in the environment,” said Sen. Kevin Van De Wege (D-Sequim), sponsor of the Senate version of the bill and a firefighter. “This is especially important for pregnant women and young children, as these chemicals can disrupt the endocrine system and impede fetal development.”

“PFAS is a forever chemical that is very difficult to get rid of, and we’ve been pumping it into our environment for decades. This bill represents an important final step to remove this chemical from our state completely,” said Rep. Beth Doglio (D-Olympia), sponsor of the bill. “I’m so thankful for all the stakeholders, including our firefighters, who helped make this happen.”

The Washington State House of Representatives passed a bill Sunday that strengthens the state’s ban on toxic PFAS chemicals in firefighting foam.

The state Legislature in 2018 passed a first-in-the-nation ban on the sale of PFAS-containing firefighting foam for most uses, but exempted some of the biggest contributors such as oil facilities, chemical plants and airports. The Safer Firefighting Foam Act eliminates those exemptions and creates the strongest state ban in the country.

“While the 2018 bill was a big step in the right direction, PFAS continues to contaminate our water and pose a risk to firefighters,” said Laurie Valeriano, Executive Director of Toxic-Free Future. “Washington’s leaders have worked on a bipartisan basis to pass some of the first PFAS protections in the nation. Now we’re poised to turn off the tap of those who contribute the most to this stream of toxic chemicals.”

“PFAS foams pose a grave and expensive threat to our communities. They contaminate our drinking water and greatly increase the risk of cancer in our firefighters,” said Rep. Beth Doglio (D-Olympia), sponsor of the bill. “Since alternative firefighting foams are available that will save lives without threatening other lives, it’s time to finally close exemptions that still allow for the use of PFAS.”

Poly- and perfluoroalkyl substances, or PFAS, are extremely persistent toxic chemicals added to many products including firefighting foams used for oil-based fires. They are sometimes referred to as “forever chemicals.” The military and airports are the largest users of PFAS firefighting foam, followed by oil facilities and chemical plants.

The widespread use of PFAS has resulted in drinking water contamination in Washington State and across the nation. Costly clean-up efforts are underway in communities such as Issaquah, Airway Heights, Fort Lewis, and Coupeville. The Navy found several contaminated wells and creeks near Naval Air Station Whidbey and is currently testing drinking water wells near Naval Base Kitsap-Bangor.

PFAS are linked to serious health problems including kidney and testicular cancer, hormone disruption, liver toxicity, and harm to the immune system. Cancer is the leading cause of in-line duty death for firefighters.

The Washington State Council of Fire Fighters has been a vocal proponent of banning PFAS in firefighting foam.

“Nobody wants to hear the devastating news that they have cancer, but for firefighters, that’s the most likely line-of-duty cause of death,” said AJ Johnson, Legislative Liaison for the WSCFF. “PFAS are polluting our water and poisoning firefighters. Safer alternatives are available. The House today took an important step to stop the flow of PFAS and we hope the Senate does the same soon.”

The bill now moves to the state Senate for consideration. Doglio and Valeriano say they are hopeful the Senate will act soon to deliver a strong bill to the governor.

“This was an important vote for all Washingtonians, and especially for our firefighters,” said Valeriano. “Now it’s up to the Senate to let the chemical industry know our state is done with PFAS in foam.”

“It is an honor to stand with our firefighters to make our communities safer,” said Doglio.

Toxic-Free Future is a statewide nonprofit organization using science and advocacy to win strong health protections for people and the environment. Toxicfreefuture.org and @ToxFreeFuture