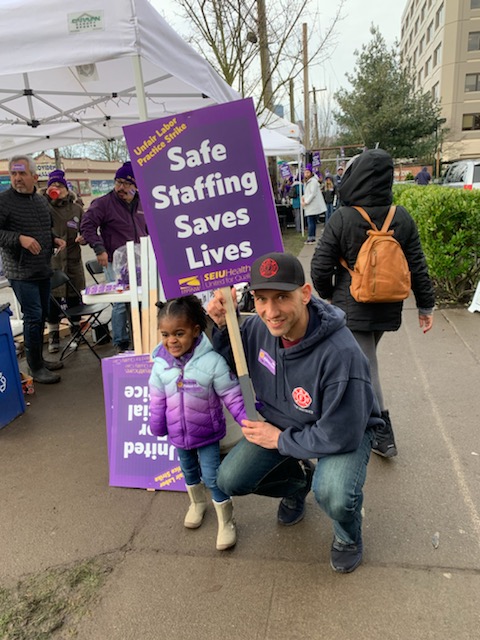 WSCFF President Dennis Lawson, Third District Representative Tim Hoover and many WSCFF members joined SEIU1199NW for a march and rally on Wednesday, January 29, 2020 to support striking healthcare workers.  Some 8,000 nurses and caregivers at Swedish Medical Center campuses in the Seattle area are fighting for quality patient care, good family-sustaining jobs, and union rights.  They held a three-day strike January 28-30, and management locked out some workers for an additional two days.  The action came at a time when healthcare executives are putting profits before patients, the middle class is shrinking, and the labor movement is under attack.

The caregivers at Swedish have been struggling with severe understaffing and impacts to patient safety, disrespect and discrimination on the job, and unfair wages, which have resulted in 900 vacant positions.  Instead of bargaining in good faith, management has rejected most proposals and broken federal labor law over a dozen times, including intimidating and terminating workers for union activity.  Now, management has said they spent $11 million hiring an expensive scab agency to temporarily replace workers during the strike.

Because “we all do better when we all do better,” WSCFF leaders, members and family members took to the streets of Seattle to march and rally in solidarity with striking health care workers.  In addition, the WSCFF Benevolent Fund made a donation to the SEIU1199NW strike fund.   WSCFF President Dennis Lawson said, “The actions proposed by management are designed to be hurtful and demoralizing with the intent to break their spirit and union.  We want to show the nurses and healthcare workers that they are appreciated and we are here for them.”