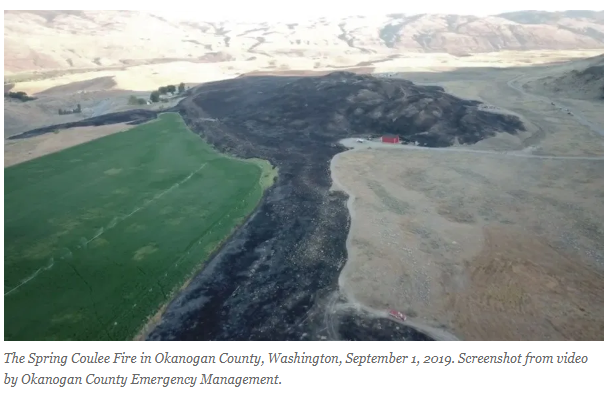 Okanogan Fire District 3 Assistant Fire Chief Christian Johnson, badly burned battling the Spring Coulee wildfire, passed away on Wednesday, October 2 at Harborview Medical Center in Seattle.  Commissioner of Public Lands, Hilary Franz said, “I cannot imagine how difficult and heart wrenching this time has been for his family.  Even though Christian was not a DNR firefighter, we consider him one of our own, and his family, friends, and colleagues are in our prayers.”

Johnson received immediate support from fellow fire fighters following his injuries on September 1.  The Washington State Council of Fire Fighters (WSCFF) Burn Foundation was notified that Johnson was injured and would be airlifted to Seattle for treatment.  As he was admitted to Harborview Medical Center, Melissa Beard, South County Fire Local 1828, met the family and stayed with them through the night.  Beard, a Burn Foundation board member, says the non-profit organization that is staffed and supported by union members of the WSCFF  continued to support Johnson and his family during his burn treatment.

The Burn Foundation Liaison Response Team assists fire fighters and their families in the aftermath of a burn injury by providing emergency housing near the hospital, working with the burn unit team, and supplying clothing, meals, and travel expenses.  Johnson suffered second-and third-degree burns over a majority of his body, according to Okanogan County Emergency Management.  He is in a medically-induced coma at Harborview and facing a minimum of two to three months in intensive care.

The WSCFF Burn Foundation has worked closely with the Wildland Firefighter Foundation to coordinate support, and a Go Fund Me account was set up for Chief Johnson.  A Christian Johnson Donation account has also been set up at North Cascades Bank, PO Box 672, Okanogan WA 98840.