Citing a long and productive working relationship between Governor Jay Inslee and the WSCFF, President Dennis Lawson announced that delegates to the WSCFF convention overwhelmingly voted to endorse Governor Jay Inslee for re-election.  “We support those who support our issues”, says Lawson.

Inslee has been a friend to fire fighters, who volunteered to serve as drivers during his first campaign for governor.  Since taking office, Inslee has strongly supported WSCFF backed legislation and has openly advocated for fire fighters.  “Jay’s support has directly and positively impacted the lives of our members and their families,” says Lawson. “He supports public pensions, collective bargaining, binding arbitration, work-place safety, presumptive disease coverage, the right to unionize and much more.”

Washington was the first U.S. state to be hit by the COVID pandemic; Inslee responded immediately, working with fire fighters and making sure their COVID exposures were treated as job related.  He came out early, setting a standard that many across the country have tried to follow.  “He has a remarkable, and deeply appreciated relationship with the WSCFF, Lawson said. “We are proud to support Jay Inslee for Governor.” 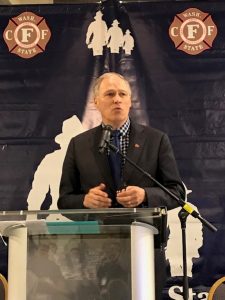